Review of The Tandem Ride 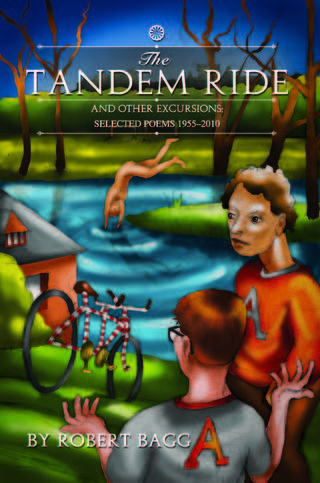 Robert Bagg has one of the few uniquely identifiable voices of his poetic generation at once open and condensed, yet poignantly explicit, probing and multilayered, a voice would one could call Baggian straight talk. In The Tandem Ride, he has compiled a versatile collection of not only a kaleidoscope of imagery and Classical allusions but also a dazzling assortment of personal experience and literary resonance. The distinguishing feature of Bagg's poems, early and late, is that he writes with a deft hand and gliding hawk's eye. He takes his subjects not only to heart but to mind, and the reader receives willingly the full force of both.

A ribbon for Bagg's penetrating diction and his excursions into the heart, for his invitation into the sensual worlds of his and our our own pasts, his minglings of the classical and modern worlds of what it is to be aware and human. No American poet has so updated, dramatized, and clarified within modern experiential settings Greek historical overtones and geographies as has Bagg. His intellectual range is prodigious, and his original diction testifies to his literary perceptions and his openness to human experience. His voice is authoritative and penetrative, and his lines simmer with overtones and undertones rife with wit and melodic in sounds.

In the opening poem, “Ostrakoi”—fragments of clay pots; one use to which 5th century B.C.E. Athenians put them was to find the matching half held by a long-lost relative—he remembers his feelings as a first grader aroused from bed by a “boisterous” adult party downstairs, seeing his mother “floating closer” with reaching arms, “not dancing, not talking” face-to-face with the a handsome family acquaintance until she eyes the boy peering through the banister:

to unwanted newborns left out to die,

so if rescued and brought up by strangers

holds the other broken half, make the match,

iscover who their parents really were. (15)

The trickiness here is the child's fascination with what he sees as the poem is carried by language, a balance between simplicity and charged spotlighting.

In the last stanza, the opening poem in The Tandem Ride sets the stage for real-life drama.

Mom did her best to raise a by-the-book

Christian gentleman. And did. But I knew

no book for the passion in her—not till

away at college, I found it in Greek myth;

yet cast in one I felt one gripping me.

I was fouteen, out dripping from the shower.

She brought me a towel. “You're such

The potshard pieces come together. Mom

stares at me. My shivering nakedness

covers itself up. Hers lights up with a flash

so blinding all I see is the darkness. (3)

In “Cello Suite,” the movement of the lines becomes part of the strategy of the poem. A pregnant cellist, the narrator's young wife, grips her instrument between her thighs and takes each note’s pulse “down the fingerboard toward resting\baritones,” and groups
of short physical lines descend southwest on the page as she reckons “passions full weight / borne down? on her. Bagg’s language tells the sory:

she’s composing
herself to play
without any
rehearsal at all

Then follows the last half of the poem in the same short line descending form weeks later when her parents
...watch their daughter
growing beyond
anyone’s control
cheek to her cello’s gnarled scroll

in a hush only he
can break with a note
perfectly pitched
to the cry
that joined his journey to theirs. (60-61)