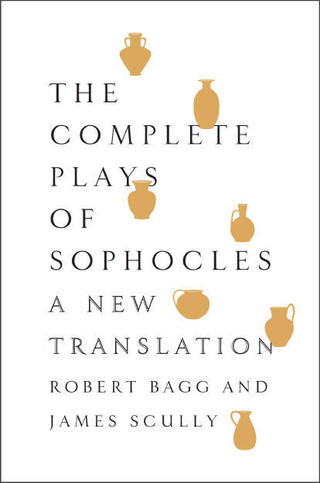 In doing so, they've departed from literalism whenever they felt it necessary. Their objective "is not only to render the literal meaning but also to communicate the feel and impact embedded in that meaning."

Such an approach to Greek drama is by no means unprecedented. As one example, Bagg and Scully cite the valuable efforts of the eminent classicist and editor William Arrowsmith, who commissioned poet-translators to develop more natural, idiomatic, and (crucially) performable versions of ancient Greek plays. Bagg and Scully, however, take this approach further than any other Sophoclean translation I'm familiar with.

A brief but illustrative example of the translators' method appears in Aias (better known as Ajax). Teukros, Aias' half-brother, and Menelaos, the famous king of Sparta, are facing off over whether Aias, who has killed himself, is entitled to a proper burial. Menelaos, a frontline fighter, sneers at Teukros for being a mere archer.

In the original Greek, Teukros replies, ou gar banauson ten tekhnen ektesamen, something like "For it is not a [mere] mechanical skill that I possess." Scully, the translator responsible for this play, takes a much freer approach to this line, rendering it as "I'm very good at what I do."

Scully's reasoning is that the negation ("it is not X") demanded by a more literal rendering would sound defensive and perhaps weak in this dramatic moment. Teukros' intent here is not merely defensive but also aggressive: He's quietly threatening Menelaos. Although this rendering is certainly not literal, it does have the right feel and impact.

This example might make it sound as if the translators have merely paraphrased the plays - in effect, turning ancient Greek dramas into 21st-century American ones. Fortunately, they haven't done this. Their avowed goal is appropriateness of expression for the dramatic moment, not informality for its own sake and not avoidance of literalism on principle. Accordingly, when poetic language is called for, they provide it. An example is Bagg's clear and well-honed rendering of the opening lines of the famous "Ode to Man" from Antigone:

Wonders abound, but none
more astounding than man!
He crosses to the far side
of white seas, blown
by winter gales, sailing
below huge waves.
He wears Earth down -
our primal, eternal,
inexhaustible god,
his stallion-sired mules
plowing her soil
back and forth
year after year.

Sophocles' plays were not created to be read in solitary silence. They were events, performed in front of large audiences on an important religious occasion, and those audiences often responded emotionally to them. Ideally, therefore, translations of these works should not only read well but also play well. Bagg and Scully's renderings strike me as the most performable versions of Sophocles I've ever encountered, and this may be their greatest strength.

Although I'm impressed by this new translation, the approach it embodies is not the only way to achieve a powerful and faithful rendering of a classic work. As an undergraduate classicist, I had a strong preference for more literal translations from Greek and Latin, such as Richmond Lattimore's Iliad and Allen Mandelbaum's Aeneid. I felt that these somehow brought me closer to the bones and sinews of the original work - its Greekness or Latinity - and I tended to avoid other, freer translations.

Thirty-five years later, my preferences have changed. Although I still love the Lattimore Iliad and the Mandelbaum Aeneid, I've gained a far greater appreciation for the type of approach that Bagg and Scully take here.